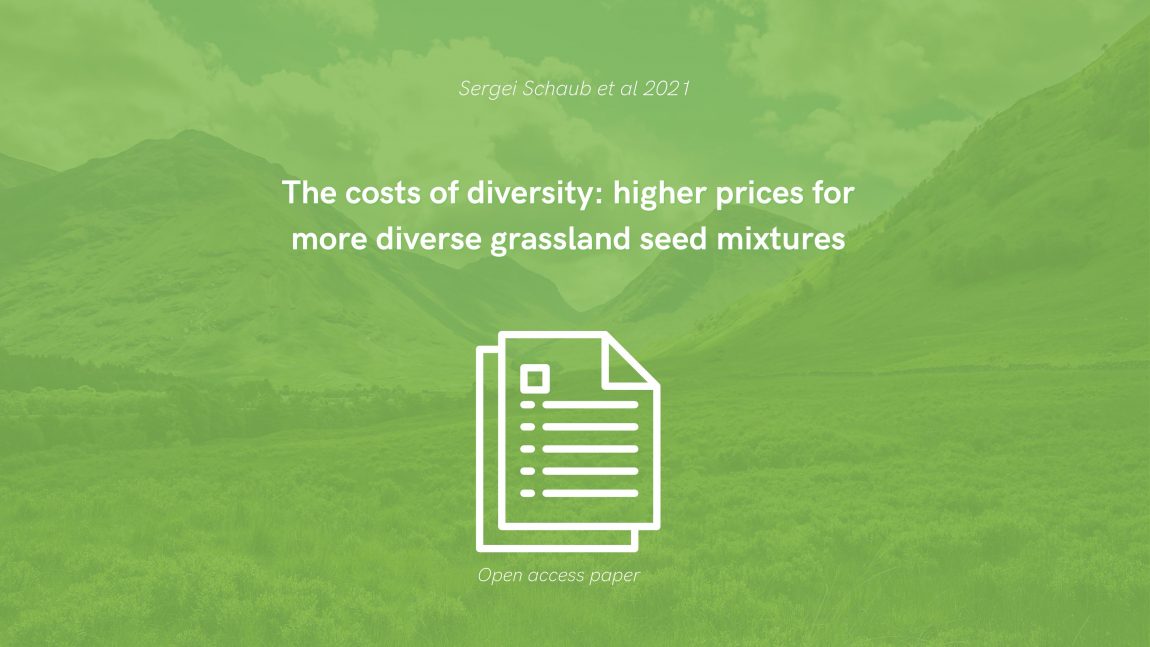 Globally, we face a dramatic biodiversity loss in agricultural systems as well as severe ecosystem degradation. In grasslands, higher biodiversity in terms of plant diversity was shown to increase the diversity of higher trophic levels and provide benefits for farmers such as higher and more stable yields. However, we lack a systematic overview of costs for more diverse seed mixtures, which are an essential tool in maintaining and increasing plant diversity in grasslands. We here investigated the prices and characteristics of 262 commercially available seed mixtures from six German or Swiss online shops and quantified the relationships between seed mixture prices and plant diversity. The most frequent seed mixtures contained 1–10 species and were designed for rather intensive grassland management. On the contrary, a smaller set of seed mixtures with particularly high plant diversity (>30 species), usually of native ecotypes, were offered for restoration purposes. More diverse seed mixtures were also more expensive. For example, a seed mixture with 10 or 30 species was on average +63% or +387% more expensive, respectively, than a product containing only one species. The relationship between plant diversity and seed mixture prices per ha was related to other seed mixture characteristics, of which plant provenance (i.e. native ecotypes vs. cultivars) was particularly important for the price. Seed mixtures containing only native ecotypes had considerably higher prices per ha (⩾+75%) than those including cultivars. In conclusion, increasing biodiversity in grasslands can be costly. These costs need to be considered when making recommendations to farmers and other stakeholders. Measures to reduce such costs for maintaining and/or increasing plant diversity could promote establishment of grasslands with higher plant diversity, facilitate the restoration of semi-natural grasslands, and contribute to solving the biodiversity crisis in agroecosystems.